Palmistry, also called chiromancy, is the art of characterization and foretelling the future through the study of the palm. It is an ancient practice, judging by the number of hands painted in prehistoric caves it would seem the human hand held a interest for humans since the stone age. The prehistoric caves in Santander, Spain display hand drawings of palms with the major lines portrayed in amazing detail. Archaeological discoveries have discovered hands made of stone, wood and ivory by ancient civilizations.The emperor of China used his thumbprint when sealing documents in 3000 b.c.e. and information on the laws and practice of hand reading have been found in Vedic scripts, the bible and early Semitic writings.
Centuries ago, the sages of India established a system of knowledge stemming from the Vedas, the earliest sacred Hindu writings. They studied the hands as a means to unveil and understand the self and relationships with others. They saw that the unique patterns of lines and signs in the hand come into being as a direct result of the way we interact with the world.

The earliest writings with the word Palmistry (spelled 'Pawmestry') included was done in 1420 by John Lyndgate in his Assembly of Gods documents. According to him, Aristotle (384-322 b.c) discovered a treatise on Palmistry on an altar to the god Hermes. The Greek physicians Hippocrates and Galen (ad 130-200) were both knowledgeable about the use of palmistry as a clinical aid, and Julius Caesar (102-44bc) judged his men by palmistry.

The first book on Palmistry was Michael Scotts De Philsiognomia done in 1477 on the physiognomy of the human body with a chapter on all the aspects of the human hand. "Just as a pebble thrown into the water creates ripples, so our thoughts create similar effects on our palms." In the seventeenth century palmistry became linked with the gypsies, who claimed to have been practicing it since the early 1400s. In the eighteenth century palmistry was 'proved' with 'scientific' information and since then palmistry has been seen as a technique in which one reads the hand with a scientific eye but speaks from intuition.

The Catholic Church saw it (and all forms of divination) as heresy and devil worshiping, and interested participants might find themselves in jail, or killed. As the Church started to lose its influence in society common sense prevailed.
Marie Anne le Norman was a famous French fortune teller in Napoleon's court who created great interest in Palmistry because of her predictive successes with Napoleon and Josephine. Two other Frenchmen D1Arpentigny born in 1798 and Desbarrolles born in 1801 did a great deal of study and writing on the subject. Their findings are still seriously respected today.

Palmistry is another of the ancient mystic forms of learning and knowing yourself and others. The lines and signs found on a person's hand have fascinated Saints, Sages and Scientists through the centuries. It is the art and science of reading a person's personality complete with the vices and virtues, the hands being "the mirror" of the person and his/her mind.

~*~
Palmistry is chiefly concerned with the mounts of the palm, the lines on the mounts, and the lines interlacing the palm. The left hand supposedly reflects inbred characteristics and the right hand acquired characteristics. The four most important lines represent life, intelligence, the heart or sensation, and personal fortune.

The art of Palmistry and my interpretations of same is much like my belief about the Tarot. I do not view it as a "fortunetelling" tool insomuch as a guide, a tool to strengthen our virtues and weaken our vices, showing us the correct path to take, and forewarning of obstacles and pitfalls to avoid.

The Three Worlds of Palmistry are represented by the Fingers, the Upper Palm and the Lower Palm, each themselves representing different elements.

A hand with all three areas proportionate represents a bright and intelligent nature. 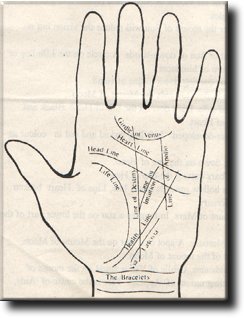 Seven Types of Hands
There are seven types of hands classified in Palmistry, each of which relate to the general shapes.

Major Lines
There are five major lines.
The Line of Life
The line of Vitality. Usually curving around the outer boundary of the Mount of Venus up towards the index (Jupiter) and middle (Saturn) fingers. Indicates constitution but also areas of major change in ones life.
The Line of Head
The line of Thought. Usually begins very near, with or above the Life Line at the base of the index finger (Jupiter). Indicates decision-making abilities, a strength of mental powers and concentration and your ability of thought processing. Can also show spine problems and upper thoracic pains.
The Line of Heart
Usually begins below your little finger (Mercury) through to the middle (Saturn) and index (Jupiter) fingers. Indicates both love (mentally) and condition (physical) of the heart. A strong line shows mental and physical stability.
The Line of Fate
This line rises from the base of the hand up towards the middle (Saturn) finger. If this is deep, indicates perseverance against heavy odds. If it is a bit wavy, there will be ups and downs all through your life. If it goes all the way up to the Mount of Jupiter, success in everything you put your mind to.
The Line of Apollo
Also known as the Line of the Sun. This line runs up to the Mount of Apollo under the ring (Sun) finger. Indicates that with correct guidance and direction, you are capable of accomplishing much. A line of capability, possible accomplishments.

~from Maat's Book of Shadows